Mystic Crystals slot is well suited to those who believe in the supernatural and fate. Centred around fortune-telling and seeing into the future, this is a classic haunting and mysterious theme that we’ve seen before but still has a strong impact. The basic rules of Mystical Crystals slot are the same as for most others. The aim is to obtain a winning combination using the base symbols of the slot, which tie in with the theme and award either credits or bonuses, potentially offering even greater rewards. These base symbols are listed as follows, ranked in ascending order based on their value:

⦁ Tarot Card, Candle and Incents of a kind

Additionally, there is also the Crystal Ball symbol which appears on reels 2, 3, 4 and 5 only, serving as a Wild meaning it substitutes for all of the above symbols. 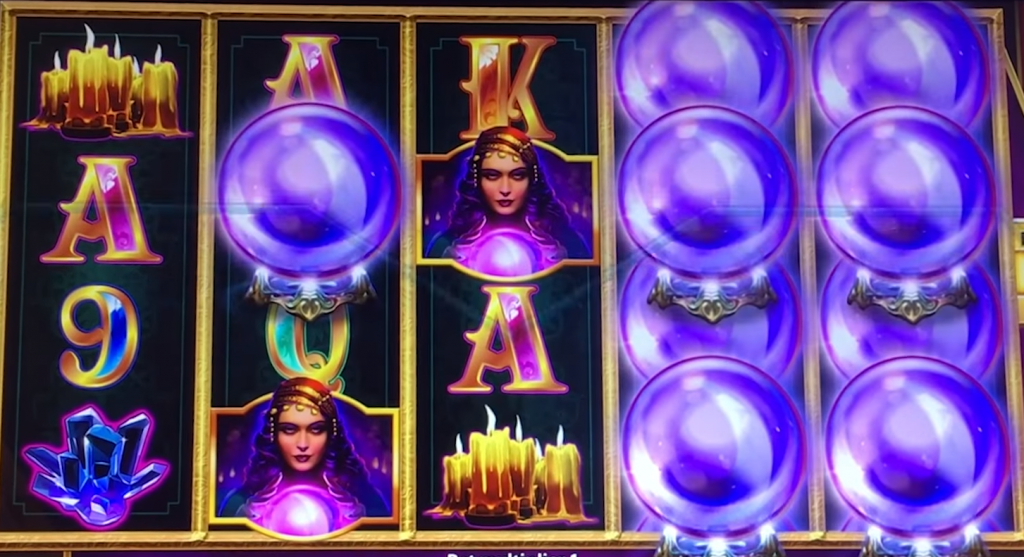 Free Games Feature. This is triggered by 3 or more Sun and Moon symbols; with 3 offering 10 free games, 4 offering 15 and 5 providing 25 free games. All symbols on reel 5 will change to a Crystal Ball, and bonus reels are in play during the Free Games Feature. If you are fortunate enough to get 3 or more Sun and Moon symbols during the feature, then you will be awarded 5 free games. I think they could have been a bit more generous here as with a lot of other free game retriggers seen on other slots, but then again some slots don’t have any retrigger feature so it could be worse. During the feature, all wins pay as Feature Paytable, and the bet multiplier and lines paid are the same as the game which triggered the feature in the first place.
Stack Symbol Feature. During the Free Games Feature, stacks of symbols can appear on reels 2, 3 and 4. At the start of each game, one of the stacked reels is selected randomly with those stacked symbols transforming in Crystal Ball symbols, while the stacked symbols on the rest of the stacked reels will transform into one of the base symbols.

Electric Strike Jackpots. There are four progressive jackpots up for grabs in Mystical Crystals slot; Mini, Minor, Major and Grand. Mini and Minor can be won during the Free Games Feature, however Major and Grand cannot. These jackpots can be won via the following combinations:

⦁ Mini. 5 of a Kind of 9, 10, Jack, Queen, King or Ace with Electric Strike symbol on the same lit line and Crystal Ball symbol substituting.

⦁ Major. 5 of a Kind of 9, 10, Jack, Queen, King or Ace with Electric Strike symbol on the same lit line and NO Crystal Ball symbol substituting.

⦁ Grand. 5 of a Kind of Inscent, Tarrot Card, Candles, Crystal of Fortune Teller with Electric Strike symbol on the same lit line and NO Crystal Ball symbol substituting.

Once the jackpot ceiling amount has been reached, then further contributions are added to subsequent progressives. 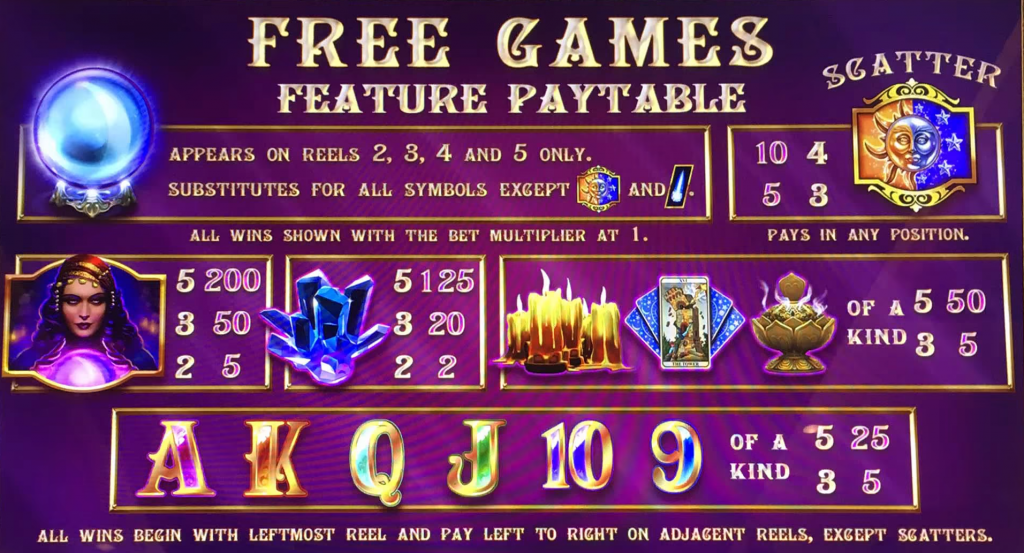 Mystical Crystals slot by VGT features a classic theme with great visuals housed in cabinet easily capable of showing them off. The slot itself is relatively simple to understand with your standard free games feature and progressive jackpots. That being said, the free games feature certainly has more to it than a lot of others which I really like, and the progressives have a rather unique way of winning them also. Overall, it’s an enjoyable game with some good features and an interesting theme, so it should appeal to quite a few players.

Deal or No Deal Las Vegas