Tetris Super Jackpots slot is a new slot from WMS that brings back one of the greatest and most popular video games of all time, Tetris. Originally released in the 1980’s, Tetris was an instant smash hit and started its release across the globe. Now you can find this simple, yet addictive game on almost any video console or computer software, so it’s no wonder that it’s finally made its way onto the gambling scene.

Housed in the new Twinstar J43 cabinet, much like Heidi’s Bier Haus slot, you can enjoy an immersive and colourful 43 inch curved display at 4k resolution, with a 22 inch display up top to draw your attention. While Tetris is a simple game by nature, WMS have really jazzed it up to make use of the incredible display, and it really works.

Moving on now to the how the game works, you start with a traditional 3×5 layout, with 243 ways to win going from left to right. The idea is to achieve a winning combination which could lead to credit rewards, or some more exciting bonus features with even bigger payouts. These are the base symbols to look out for, ranked in ascending order based on value:

Tetrimino Feature. This feature may activate on any spin, upon which 1 or 2 tetriminos will be randomly placed on or above the reels. These can take 7 different shapes of different colours in different rotations. All the positions covered by these symbols will then change to a random base symbol tetrimino, increasing your odds and value on a payout. If the tetris scatter symbol is covered by a tetrimino, it will still count towards any potential bonus trigger. If a position above the reel is covered by a tetrimino, it will constitute towards an additional row for that particular reel, with the maximum number of rows which can be added being 4.

Free Games Bonus. This bonus is triggered by 3 scattered Tetris symbols, appearing on reels 2, 3 and 4 only, awarding a 2x total bet and 10 free games. During this bonus, each free game will activate the aforementioned Tetrimino feature. An alternate set of reels is used during this feature, with a Wild symbol being used instead of the Tetris symbol on reels 2, 3 and 4.

Jackpots. The two jackpots available, Minor and Major, are displayed above the reels. With each wager, the jackpots will increase and can be awarded randomly. The chance of winning a jackpot increases with the amount bet. 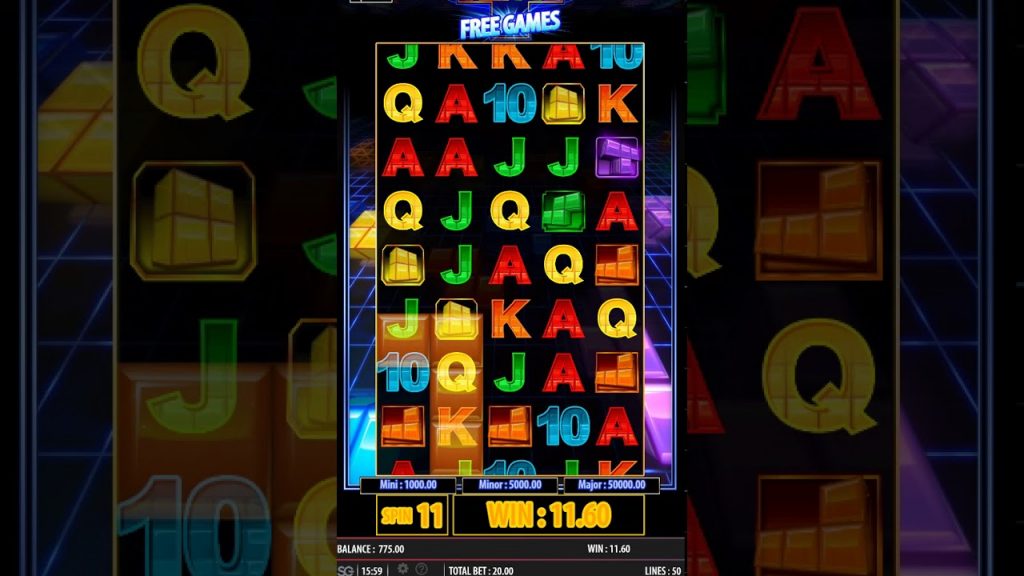 I love how WMS have turned this classic game into a slot, and the design of the game is great, with extra vibrant colours and a 3D effect. However, I think there’s been a bit of a wasted opportunity here. The actual mechanics of Tetris itself haven’t really been used, and I think this is really disappointing. There’s a lot more they could have done, such as including a feature where pieces can, or possibly not, fall into place just like the game. If not, then they could fall off the screen. I think a feature like this would have worked especially well on a display this tall. In actual fact, this slot could use pretty much any theme and work in almost exactly the same way. Overall, it’s an attractive design, with a very simple game play mechanic, but not very Tetris focused which I think could have made the game much more fun and interactive.