Belle Enchanted Mirrors slot is a slightly older style slot from WMS, based on of course Beauty and the Beast, a Disney movie classic. While the animation of this slot doesn’t quite match that of the movie itself, it’s certainly appealing and easy on the eye. For those who don’t know the story of Beauty and the Beast, it features Belle, a young daughter of a man who has been imprisoned by a Beast who offers to take his place, not knowing the Beast is actually a prince with a dark spell cast upon him. Naturally, a romantic story follows and Belle Enchanted Mirrors slot uses this story and the characters to present an enchanting game.

Moving on the the game play itself, Belle Enchanted Mirrors slot features a 5×4 layout with some of the characters from the original Beauty and the Beast story. The aim is to obtain winning combinations from left to right of these symbols, which will grant either credits of bonuses where you can play to win some big rewards. The base symbols in this slot are listed here in ascending order based on their value:

Each of these symbols has a counterpart, surrounded in a purple chain which only appear on reel 1 during the Enchanted Mirrors Feature, and form a winning combination when either of a kind or mixed are aligned correctly. There is also a Wild symbol, Belle, which has a similar counterpart and they substitute for all of the above base symbols. 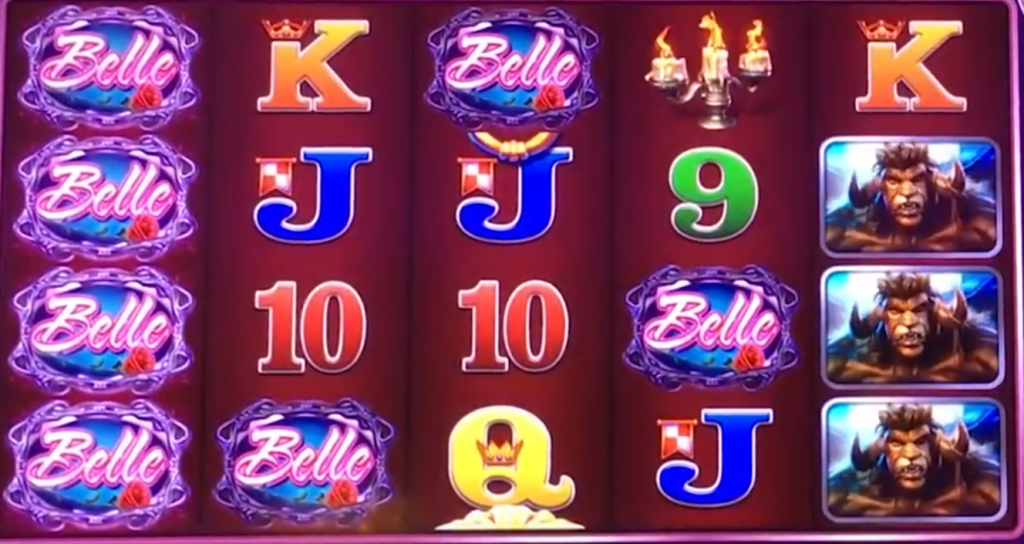 Enchanted Mirrors Feature. This is triggered by reel 1 being populated by blank purple chain symbols, which only appear on reel 1. If reel 1 has these symbols but does not fill the entire reel, then the symbol will not contribute to any pays. During this feature, the wheel on the right will spin and land on a symbol. For any symbol surrounded by purple chains on reels 2-5, they will transform into the symbol highlighted by the wheel. Any symbol can appear on the wheel apart from the doorknob and the blank purple chain symbol. The multiplier wheel, respin wheel or both may randomly activate at the same time as the symbol wheel. The multiplied wheel will select a multiplier between 1x to 10x which is applied to all wins at the end of the Enchanted Mirrors Feature, while the respins wheel determines the number of extra respins, with a maximum of 5 available. At the end of each spin, all purple chain symbols and symbols of the type chosen by the wheel lock into place and transform into that symbol for the rest of the respins, apart from the Wild symbol Belle which will transform into its purple chain self for the rest of the respins, with pays evaluated at the end of the feature. Once all reel positions are filled with a symbol of the type chosen by the wheel or Wild, then the feature ends and pays are evaluated.

Belle Pick Bonus. This is triggered by 3 scattered doorknob symbols which appear on reels 1, 3 and 5 only. To begin you start the first streak, picking a rose to reveal a credit reward and either Belle or Beast. Extend the streak by continuing to pick the roses revealing either the same character or Wild. The streak is broken by picking a different character and displaying an X. 3 broken streaks will end the Belle Pick Bonus. The awards at the end of the bonus depend on the number of extended streaks, and are as follows:

respectively. Once a streak reaches 10 picks, then each new pick awards a 50x multiplier. 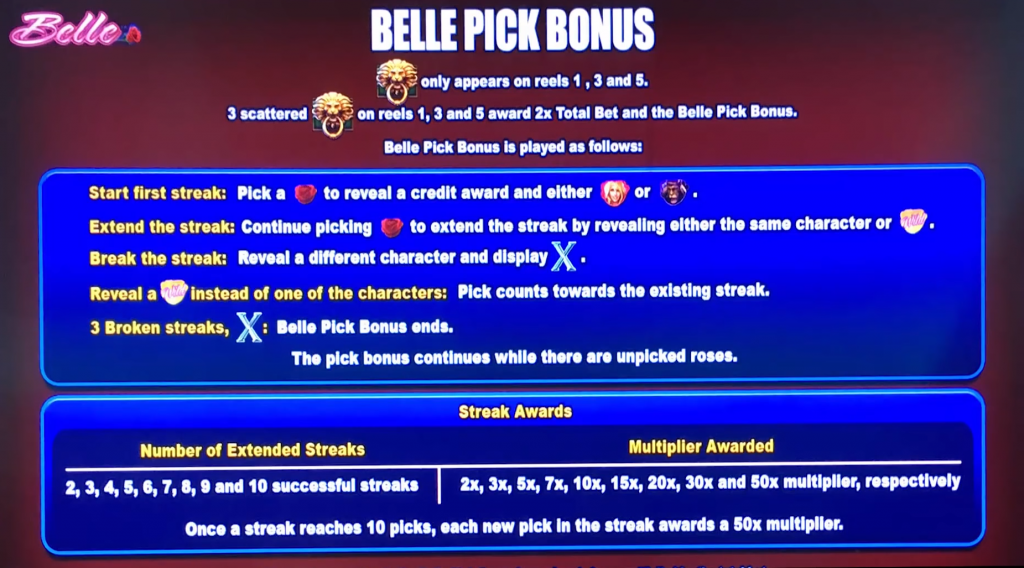 I really like Belle Enchanted Mirrors slot. While the graphics aren’t anything to write home about, they certainly suffice and the symbols and characters in the game are bright and cheerful, in keeping with the theme. But the main attraction to this game are the bonuses, both of which are entertaining, engaging and most importantly rewarding. The pick feature is certainly one of the best I’ve seen, while the Enchanted Mirrors Feature is substantial and enjoyable. This is a great slot from WMS which I think many will enjoy, and goes to show that newer slots aren’t always the best slots. If you like Belle Enchanted Mirrors slot, then you should check out 9 Suns slot, another older style slot with a fun bonus.

Call of the Moon Slot