Fortune Rabbit slot comes from Ainsworth Gaming and is part of their Fortune series of slots, offering bonuses, progressive jackpots and free games with the ability to retrigger more. This particular game can be found on both thee A560SL and A640, each offering excellent graphics and animations, along with a great sound system.

The goal, as you’d expect, is to get a winning combination using the base symbols of the slot, which are centred around the theme of animals. These base symbols are listed here, ranked in ascending order based on their value:

It’s interesting that despite having a wide range of symbols, the range of values they provide is minimal. Additionally, you also have the Rabbit symbol which substitutes for all of the above symbols in a winning combination. When this appears anywhere on reels 2 or 4, all symbols in all positions on those reels are replaced by the Rabbit symbol. The scatter symbol is a Carrot which offers a small credit reward for 3 or 4 in any position, and the Rabbit Bonus symbol substitutes for all symbols apart from the Carrot. Finally, if the Radish symbol which also serves as a Wild for all symbols apart from Carrot and Rabbit Bonus substitutes in a winning combination, then the prize may be multiplied by 2x or 3x.

Stacked Symbol Feature. 3 or more scattered Carrot symbols will start this feature and award 10 free games, during which Rabbit and Rabbit Bonus are the only symbols which can appear on reel 5. The Rabbit Bonus substitutes for all symbols apart from Carrots. Additionally, Rabbit symbol can only appear on reels 3, 4 and 5. If two or more scattered Carrot symbols appear anywhere, then an additional 5 free games will be awarded. The Stacked Symbol Feature paytable is applied during this feature, with credit bets and lines being the same as the game which triggered the feature in the first place.

Replace Symbol Feature. This is similar to the Stacked Symbol Feature above in that it is triggered by 3 or more scattered Carrot symbols and awards 10 free games. Similarly, reel 5 only has Rabbit and Rabbit Bonus symbols, but Rabbit Bonus substitutes for all symbols apart from Carrots and Radishes. The Radish symbol appears only on reel 3 and substitutes for all symbols apart from the Rabbit Bonus and Carrot symbol. When forming part of a winning combination, the prize may randomly be multiplied by 2x or 3x as shown on the screen. This feature can also be retriggered by 2 or more scattered Carrot symbols, awarding 5 free games.

Bonus Prize. There are two bonuses that can be awarded during this game, each offering a fairly large reward. 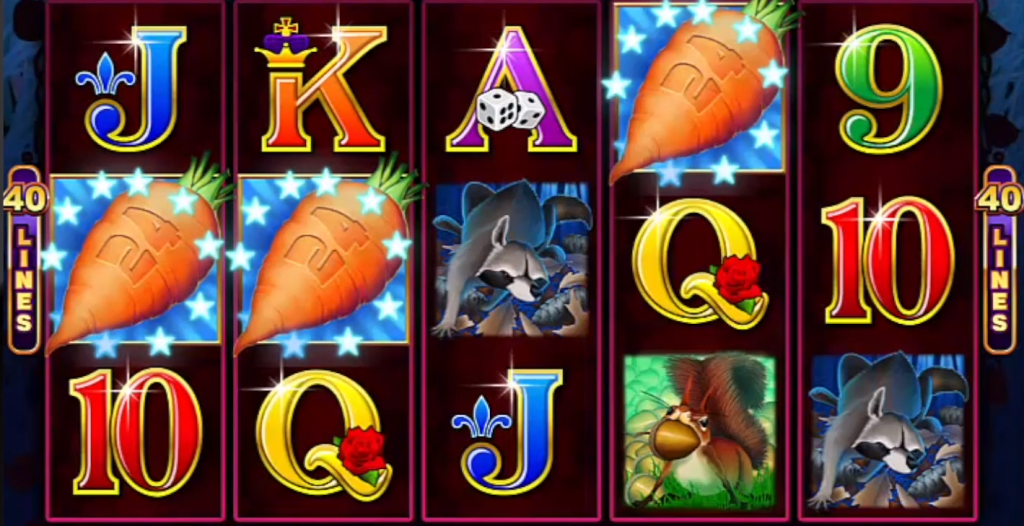 I think Fortune Rabbit slot is a very interesting game from Ainsworth. While they aren’t the biggest slot manufacturer out there, I think they’ve shown here they have what it takes to make an interesting and rewarding slot with many of the features that people enjoy. The free games are a lot of fun, and although there aren’t as many as we’ve seen in some other slots like Fire Chariot slot, they can be very rewarding and I like how there are so many Wilds in this game. Overall, I think Ainsworth have done a great job with Rabbit Fortune slot, with it’s great animations and graphics (although slightly strange looking rabbit character), great features and overall simple but enjoyable gameplay.