Spy vs Spy slot is taken from the comic strip from Mad magazine, featuring two spies who are completely identical apart from their colour. Each is determined to defeat the other, and since it began in 1961, Spy vs Spy has become a popular name with its own merchandise and TV series. Despite appearing different to your typical slot, the basics of Spy vs Spy slot are still the same. Form a winning combination using the base symbols which are listed here, ranked in ascending order based on their value: 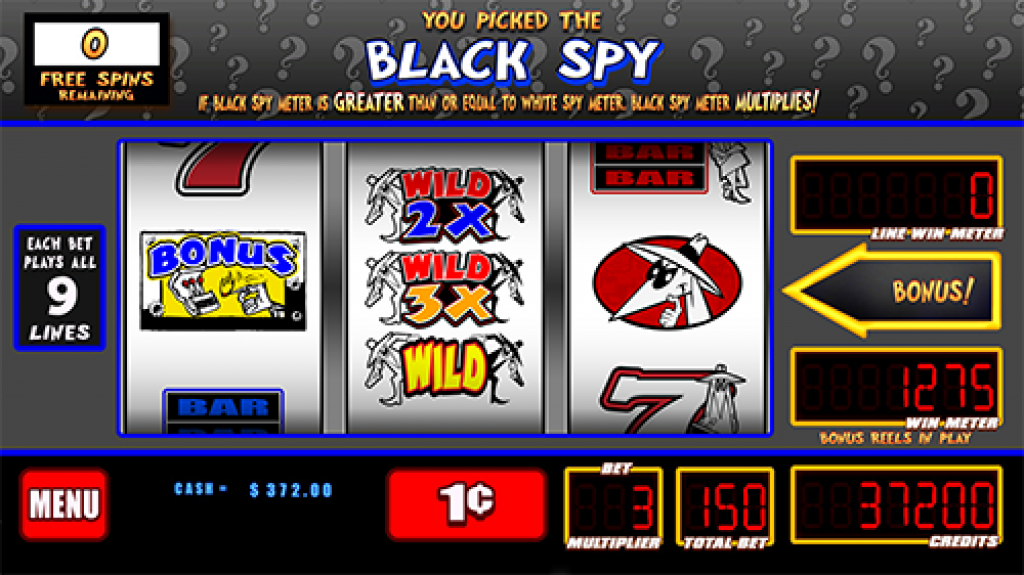 If any White Spy mode trigger symbols appear in the versus location when already in White Spy mode, then the amount displayed in the symbols Bonus Versus Meter is awarded, with the value added each time a symbol appears there. The value for Triple Bar is the lowest at 50, White Spy is at 150, while White 7 is 250. These values are multiplied by the prior game’s bet multiplier. When switching from Black Spy mode to White Spy mode, the meters are cleared. If Wild appears in the versus location, then the sum of all 3 of these symbols is awarded.

If Any Black Spy mode trigger symbols appear in the versus location, then the same applies, but with different values, with double bar adding 25, Black Spy adding 150 and Black 7 adding a whopping 1000. Wild also has the same effect as for White Spy mode.

Free Spins Bonus. There are 3 different bonus symbols which appear on reels 1, 2 and 3, respectively. 3 of these scattered on any pay line will award 10 free spins, where you can choose White or Black Spy. The bonus versus meters are set as follows for both White and Black Spy:

When the White or Black trigger symbols appear in the versus location, these are the values that will be added, with Wild adding the sum of the value when in the versus position. Additionally, scattered bonus symbols will award another 10 free spins.

Once the free spins are over, the values of the versus meters will be the same as they were when it was initiated. What’s more, the Grey Spy symbol may also appear to enhance the versus bonus win amount, potentially adding 100 credits multiplied by the initiating game’s multiplier to the spy total meter, switching the Black and White total meter, or multiplying either the spy total meter value by 2x, or increasing the selected winning spy total meter from 2x to 3x. The Free Spins Bonus is guaranteed to award a minimum of 10x the total bet, with the Grey Spy appearing to ensure this happens if any bonus ends with less than 10x total bet.

All in all, Spy vs Spy slot is a simple slot with some great features, and what I really like is how well WMS have kept to the original story, unlike some slots such as Tetris Super Jackpots slot, which doesn’t relate much to the theme on which it’s based. If you’re a fan of the original stories, or just enjoy a more traditional slot with some great rewards, Spy vs Spy slot is for you.