Sweet Nothings slot is a juicy slot from WMS, full of sweets and tasty rewards that will no doubt make you hungry while you play. It’s a unique slot in the way it has the Sweet Nothings Feature, allowing you to build up smaller wins and in return receive a large win from the collection of small wins. It’s relatively simple and I will explain more on this shortly.

Additionally, Sweet Nothings slot features a Wild symbol which appears on reels 2, 3 and 4 only and is Wild for all of the above symbols apart from Scattered Smarties.

Sweet Nothings Feature. Unlike most games, 10, Jack, Queen, King and Ace award Sweet Nothings, which are only added to the Sweet Nothings meter shown on the right of the reels. The value added is as follows:

Free Spins Bonus. 3, 4 or 5 Scattered Smarties will award 10, 15 or 25 free spins, respectively. During the bonus, each additional Scattered Smartie symbol will award an additional free spin. At the start of the bonus, 3 of each 10, Jack, Queen, King and Ace on reel 5 will appear with a multicoloured symbol. Each time this appears on reel 5, the free spins multiplier will be increased before the spin is evaluated. The multicoloured symbol will be removed from that symbol and the remaining 2 symbols for the rest of the bonus. Only 10, Jack, Queen, King and Ace are multiplied by the multiplier. The multiplier is determined as follows: 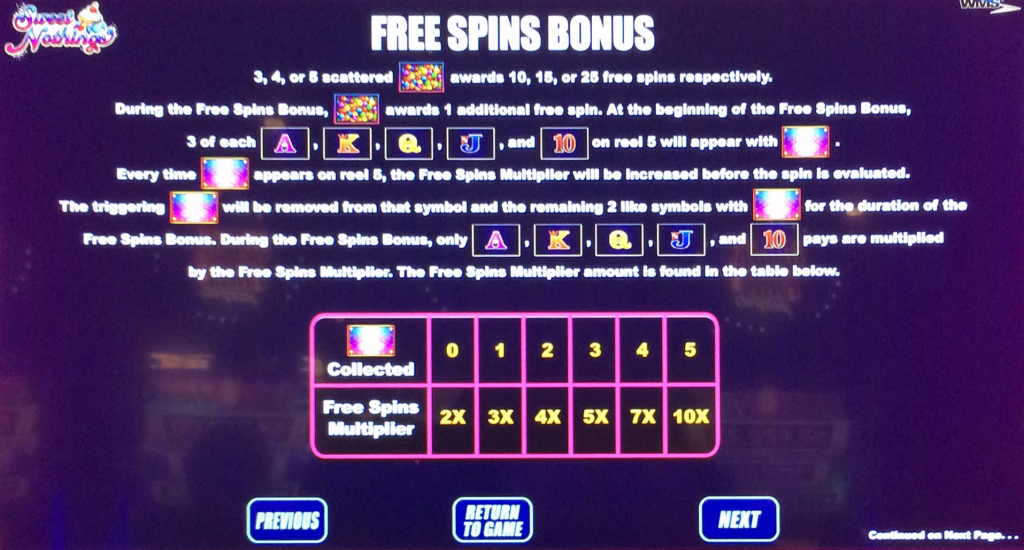 I think the idea behind this slot is an interesting one that at first sounds appealing but unfortunately, in practice, I’m not sure it really works. Being able to build up rewards into bigger ones sounds like a great idea, but doesn’t really work out as well as you might hope and I think will actually frustrate some players. That’s not to say some people won’t enjoy this, and there is of course more to the slot than just the Sweet Nothings Feature, with the Free Spins Bonus also available, and not forgetting, of course, the delicious theme with some great graphics and animations. Overall then, I would suggest playing this slot with caution and don’t be fooled by what initially sounds like a very tempting feature but certainly give it a go by all means and see if you like it. Don’t forget to check out some of our other reviews here too.

Deal or No Deal Las Vegas